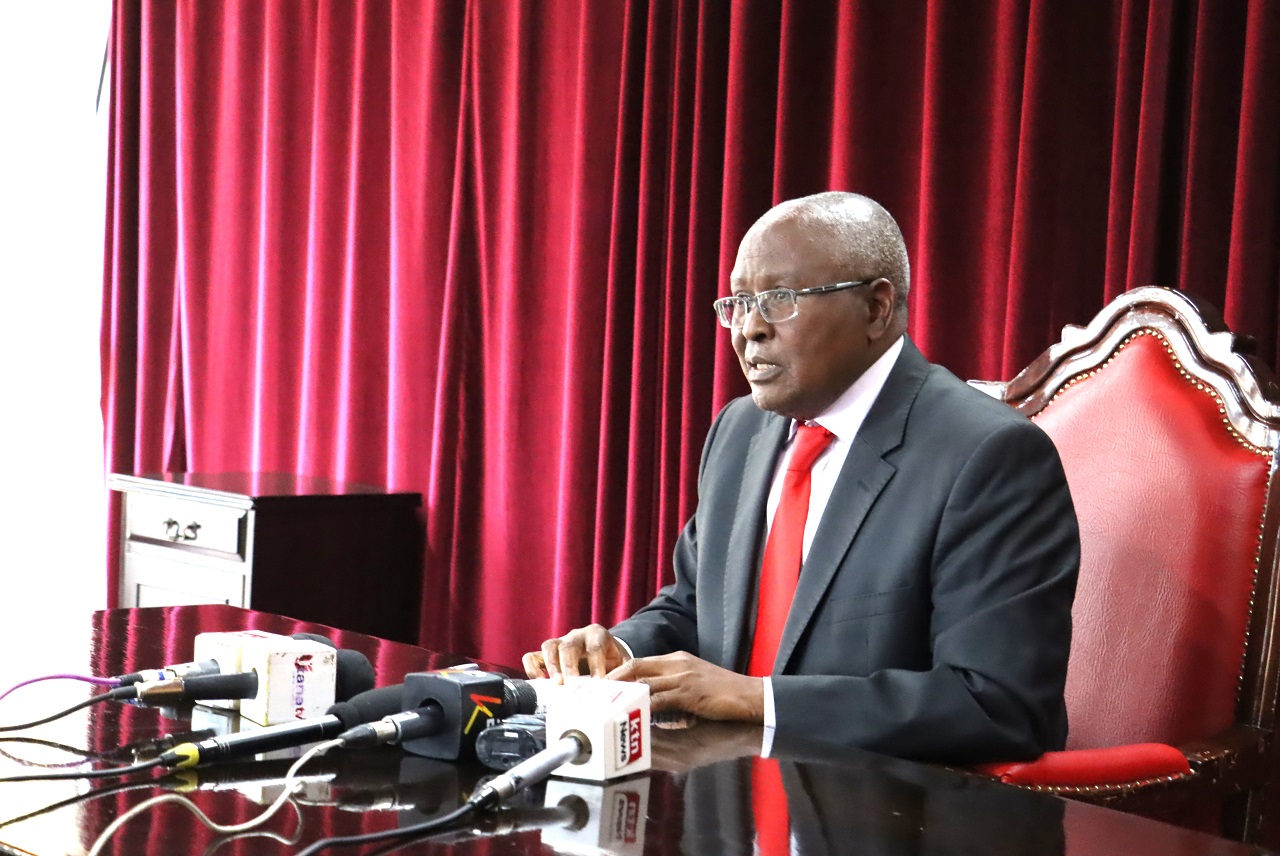 Vice-Chancellor Egerton University  Professor Isaac Kibwage has explained the financial situation in the University that it is a historical issue and a financial debt he inherited when he joined the office last year.

Professor Kibwage allayed fears that his administration has declined to pay full salaries and explained that there are no deductions whatsoever that have been done on employees’ salaries. He noted that the staff is being paid current percentages as it honors its tax obligations like the Pay as you earn (PAYE) and pensions remittances.

"Our president has spoken about the financial problems of Universities. It is not like we are refusing to pay full salaries; we are unable. Our problem is historical and I inherited most of our debts," Vice-Chancellor Prof. Isaac Kibwage told journalists in a press briefing at the Njoro Main Campus, Nakuru County.

This follows a spate of the University Academic Staff Union issuing several notices of strike and filing a raft of court cases to push the University management to pay full salaries.

He opined that the University management is ongoing negotiating with the National government and has met various education stakeholders to find ways of boosting the university’s funding.  Like all public Universities, facing the same financial gaps, Egerton University has continued to engage the government to find a long-lasting solution.

“We are also engaging staff and asking them to remain calm as we wait for the engagements with the Government to resolve this funding deficit.   staff has earned their pay legitimately and it is clearly indicated in their payslips as 'deferred pay.' It is their money we will pay when we get sufficient funding. We have not deducted our employee's pay as it is misrepresented," VC. Prof Isaac Kibwage.

Amidst this financial situation, the University Management, the University Chief Executive Officer said has announced a graduation date to allow the timely completion of academic programmes to churn out the human capital required in the industry. He says that there is no reason of holding students who have completed their studies from graduation, once the threshold has been met.

"Egerton University will hold its 46th Graduation ceremony on 10th February 2023. Those attending physically and those who shall be virtual shall be given the power to read," Professor Isaac Kibwage said in a press briefing in the Chancellors' Chambers.

The Vice Chancellor further say  that the Covid-19 pandemic and external factors such as climate change adversely affected our operations which resulted in reduced funding from other sources of our IGUs such as the ARC Hotel and the Farming enterprises.

Notice Of Intention Of Declaration Of Redundancies.

Whereas there are challenges in meeting our incidentals and the wage bill, Professor Kibwage who is the Secretary to the University Council stated that the notice of Intention to declare redundancies is still active. The notice (EU/APD/DVC/103): NOTICE OF INTENTION TO DECLARE REDUNDANCY dated 21st December 2022, is a proposal aimed at staff restructuring due to reduced funding, which has made it challenging for the University to meet its financial obligations.

He reiterated that the total number of University staff stands at 1,454 and not over 1,500 as published in a local daily recently. The University Management and Council have issued the notice of intent to declare a redundancy to enable restructuring after many of our academic departments face difficulties to operate. We have continued to lose staff through attrition, retirement, and resignations. Therefore, there is a need for re-organization. He explained that misinformation and distortion of facts by a section of the media have also occasioned the truth about Universities funding not to come out to be understood by diverse stakeholders of the University.

“We cannot touch research funding to pay salaries. That is donor funding with clear guidelines on how it is used. On the staff redundancies, there is a criterion which has be followed as provided by the government policies and the law” Prof. Kibwage explained.

In the event that the University receives sufficient funding, the projects and programs of the University shall thrive to produce more graduates and boost academic research for national and global growth, which is our core mandate.

To avert the financial crisis, public universities face, especially at Egerton University, the Differentiated Unit Cost (DUC) model of funding undergraduate students needs to be increased. In addition, the student fees of Ksh 16,000 per year as compared to high school fees of Ksh 43,000-83,000 in most public schools to Ksh 100,000-250,000 per year in most private school is no longer tenable. University fees was last evaluated over 30 years in the 1990s also need to be re-evaluated based on current financial requirements.

Strategies the University is employing to Increase Funding

The Management and University Council has rolled out several strategies to increase revenue and reduce consumption. We are also lobbying for increased funding, and reducing leakages. There is enhanced marketing of our academic programs to increase student enrolment to boost income-generating units (IGUs). We are also working with other institutions like the Universities Funding Board (UFB) through proposals to seek donor funding among innovative approaches.

Handling loans and other financial institutions

The Egerton University Pension Scheme has remained the most stable in the country. The Retirement Benefits Scheme continues to run its affairs and its financial statements are published and available for scrutiny.

The University continues to work with its financial partners like Saccos, Commercial banks, Kenya Revenue Authority, and Insurance companies among others to meet its commitments.