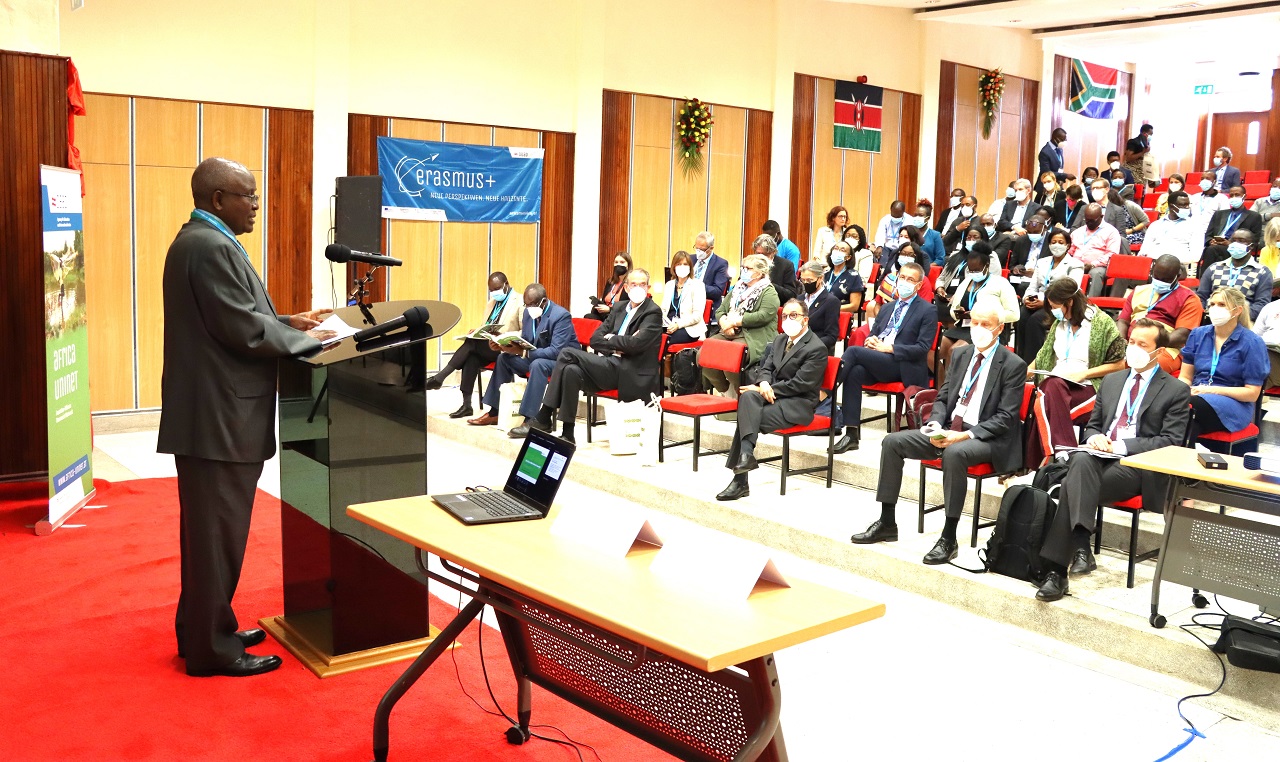 The announcement was made as the second General assembly of the Africa-UniNet and Erasmus + Cooperation Seminar culminated on a high note with the Vice President of Africa-UniNet asking members to stand stronger despite the global challenges affecting the education sector.

More than 90 participants from 19 African countries and approximately 40 participants from Austria met at Egerton University to discuss scientific and institutional questions and to discuss possibilities for further cooperation – both on the basis of the Africa-UniNet network and as part of possible participation in Erasmus+.

Christian Fellner, Ambassador of the Republic of Austria to Kenya said, “Egerton University and the University of Agriculture in Vienna are for decades working together for one of the most important goals humanity has: feeding the population! New challenges come up: the Ukraine crisis makes it clear that food self-sufficiency is an extremely important goal to reach for any country.”

Dr Fellner noted, Kenya is still not feeding itself – so there is still some way to go, but I am confident that this long-lasting cooperation between our Universities will bring more and more results as they are working on new challenges like climate change, drought, responsible management of water resources.

The Ambassador advocated for girl child education saying, the education of women is the strongest predictor for the reduction in population growth.

He went on to say, how education decreases child mortality and malnutrition, education is strongly negatively correlated with child marriage and child labour and it reduces gender inequality.

Speaking at the conference, Egerton University Vice-Chancellor Professor Isaac Kibwage observed that the geographical position of the University has not only enabled it to have national, and regional collaborative research programmes with funding that support researchers and postgraduate training, but also at the international level which includes the joint Degree programme in Limnology and Wetland Management (LWM). The programme is in Partnership with BOKU, Austria, Egerton University, Kenya and IHE-Delft, The Netherlands.

The funding is by the Austrian Development Cooperation (ADC) since 2012 under projects “Development of Educational and Research Capacity in Eastern Africa for the Sustainable Management of Aquatic Ecosystems (CAPAQUA) and Education and Research Hubs for the Sustainable Management of Freshwater Ecosystems in Eastern Africa (AQUAHUB).

Professor Kibwage thanked the donors; Erasmus+ Programme of the European Union which has funded the project "Strengthening Agri-Entrepreneurship and Community Engagement Training in East, West and North Africa (AgriEngage). Egerton University is a beneficiary of three projects as the lead institution and several others as a partner funded by Africa-UniNet.

An election of top officials of the prestigious Africa-UniNet, a network of 20 Austrian and around 40 African Universities and Colleges was done. Professor Kitaka retained the Vice-Presidency, and BOKU university in Austria retained the Presidency.

The delegates resolved to retain the board of management because they were impressed with the current composition and regional representation. They as well resolved to allow the current leadership to continue at the office has led the organisation successfully during trying Covid-19 pandemic.

“We are currently in multiple local and global crises. The economic, political, and social upheavals are so dramatic that we fear global instability and insecurity not seen since the end of the Second World War,” said Professor Kitaka.

Thanking the delegates for re-election, she distinguished that all over the world, there are noticeable consequences of man-made climate change, and the societal consequences of the COVID-19 crisis we can currently count 29 wars, one of them brutally carried out in Austria’s neighbourhood since 24 Feb. 2022.

Noteworthy, Professor Kitaka described the effects of the Russian war with Ukraine, which she says hardly anyone thought would be possible, as deeply shocking.

“This unbelievable brutal and seemingly anachronistic war has so far not only cost the lives of tens of thousands of people but also has massively damaged the networked structures of the global economy. This is a wake-up to all of us in this meeting on how to re-engineer the global economy and more so through networking in collaborative research, the key pillar of Africa-UniNet,” stated Professor Kitaka.

Professor Kitaka told the delegates that as responsible scientists, they need to have clear responses to uncertain, unstable, dangerous global situations.

“As responsible scientists and colleagues, our responses to situations must be cooperation instead of conflict, evidence-based knowledge production instead of ideology, participation instead of dividing nationalism, responsibility for each other instead of unilateral interests, democracy instead of autocracy, armament and war,”Professor Nzula Kitaka, Vice-President Africa-UniNet.

She continued, “We must not be discouraged by the multiple crises. We have to face the challenges: poverty and violence are consequences of wrong developments. In order to correct this, cooperative networks are required that promote sustainable developments with all their might.”

More than ever before, the Second term Vice President of Africa-UniNet called upon the scientists to think, research and act together, to create an innovative, sustainable future so that peace, freedom, democracy and a life of human dignity can be realized for all.

Jakob Calice, Managing Director, OeAD said, “The challenges we face as societies oblige us to this kind of cross-national collaboration. Every regional or local problem has a global dimension and can no longer be thought of and researched separately from each other. The Sustainable Development Goals of the United Nations offer a suitable contextual framework and define targets to which Africa-UniNet also feels committed.” OeAD is Austria's Agency for Education and Internationalisation.

The three days conference and Erasmus plus seminar involved sharing experiences in academic research and charting the future of the collaborations. The delegates mulled the possibility of the production of a journal for publication of emanating scientific research. Erasmus+ supports the internationalization and modernization of education as well as increased academic cooperation by means of mobility and cooperation projects within Europe and with partner countries worldwide.

“Most of the research work from Africa does not get published easily in European journals, we need to consider a homegrown journal through this partnership so that the works of African Scholars can get out and be useful,” said Dr Mwalimu Musheshe, Founder and Vice President African Rural University, Uganda.

There were presentations by beneficiaries of APPEAR, a programme of the Austrian Development Cooperation (ADC). It is executed by the OeAD. The programme has made it possible for academic partnerships and associated master’s and doctorate scholarships.

Email: This email address is being protected from spambots. You need JavaScript enabled to view it.