OFFICE OF THE VICE-CHANCELLOR

The Egerton University community mourns the passing of Prof. Richard S. Musangi and celebrates the University’s connection to this distinguished scholar, educator, and academic administrator. Prof. Musangi, who was born in 1934 in Bungoma County, Western Kenya, was the Principal of Egerton College between 1981 and 1987. Upon the elevation of the College to a University in the latter year, he became the inaugural Vice-Chancellor of Egerton University, serving in that capacity until 1992. 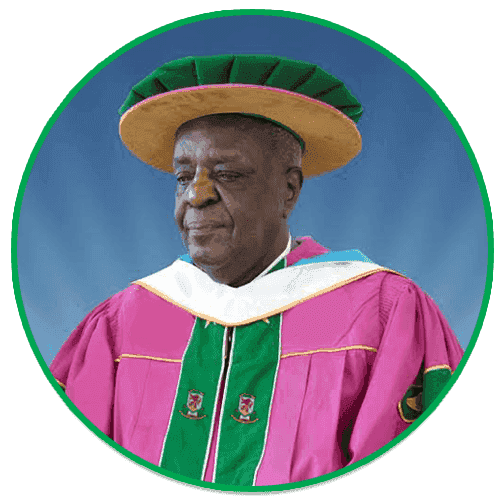 Prof. Musangi fondly remembered that his association with Egerton College started in 1961, when, as a final-year Agriculture student at Makerere College, he and his classmates stayed for two nights at the College while touring neighbouring farms. His next encounter with the College was in 1965, when, as a lecturer in Animal Science at Makerere, along with other colleagues, he came to Egerton to examine students for the East African Diploma in Agriculture, which was conducted from Makerere. In 1972, Musangi, as a lecturer in Animal Science at the University of Nairobi, was appointed an external examiner for Egerton College. At about the same time, Musangi joined the Egerton College Board of Governors (BoG) by virtue of being the Dean of the Faculty of Agriculture at Nairobi. Prof. Musangi became the Deputy Vice-Chancellor of the University of Nairobi in 1979, and it is from that position that he came to Egerton College.

Under the leadership of Prof. Musangi, Egerton College experienced tremendous development in the 1980s. Prof. Musangi steered the institution through a major United States Agency for International Development (USAID)/Government of Kenya-sponsored expansion programme. The actual implementation of the programme was a joint venture between the Egerton authorities and the South East Consortium for International Development (SECID), USA. The programme entailed the development of various forms of infrastructure, counterpart training for Egerton staff, and acquisition of equipment. Promoting research, teaching, and community service, the programme constituted a big leap forward for Egerton. The SECID impact on infrastructure and staff development not only increased the student population from 860 in 1982 to 1526 in the 1986/1987 academic year but also solidified the chances for the eventual upgrading of the College to a fully-fledged University.

Another development at Egerton specifically attributable to Prof. Musangi was the Institutional Development for Agricultural Training (IDAT) programme. The purpose of IDAT was to strengthen and consolidate the activities under the previous expansion programme, which had ended in July 1984. IDAT resulted in additional training opportunities for Egerton staff.

Two new diploma programmes were initiated at Egerton in the 1980s in addition to the fourteen already established. These were Diploma in Food Marketing and Diploma in Forestry. The launching of these programmes demonstrated Egerton’s flexibility and capacity to respond to national and broader needs. By 1980, agricultural marketing had been identified as a hindrance to agricultural development in Kenya. Similarly, the Diploma in Forestry was in line with a new Government approach focussing on rural afforestation for national development.

An expert builder of intricate academic and development networks, internationally respected and connected to numerous donors, Prof. Musangi stimulated unprecedented vibrancy in research, outreach, and related activities at his institution. In particular, Prof. Musangi spearheaded the intensification of Egerton’s outreach programme, which led to the setting up of the Agricultural Resources Centre (ARC). Similarly, under him, Egerton’s collaboration with the International Maize and Wheat Improvement Centre (CIMMYT), which had started in 1975, deepened. This collaboration resulted in joint work in a variety of projects as well as in the establishment of the Crop Management Research and Training Centre (CMRT). Both ARC and CMRT continue to thrive as facilities for training of agricultural professionals at the University.

Concerned about the state of farms around the College, in 1984 Prof. Musangi established an extension project whose aim was to disseminate the knowledge generated at his learning institution to the benefit of farmers in the neighbourhood.

The increased demand for academic staff at the growing institution led to aggressive recruitment in the 1980s. Prof. Musangi travelled overseas to personally meet identified bright postgraduate students to persuade them to join Egerton upon the completion of their studies, and he successfully recruited a number of such staff. By the end of 1985, Egerton College had a faculty of 134 full-time members, 13 of whom had Ph.D. degrees, and 50 had M.Sc. degrees.

Aided by his administration, Prof. Musangi also took significant steps to promote the welfare of staff through such projects as a tenant service scheme, extramural studies, recreation and the Catholic chaplaincy. With foresight and decisiveness, Prof. Musangi abolished the institutional credit system which had made many Egerton employees perpetual debtors. Working closely with the BoG, Prof. Musangi also brought about the development of Kilimo Primary School and Egerton Primary School.

Prof. Musangi was the driving force behind the College’s renewed effort in the early 1980s for its elevation to the status of a University. The push for the introduction of degree programmes at Egerton persuaded the Government to set up the Egerton College Upgrading Committee (the Ayany Committee) in December 1983 to look into the issue. The Ayany Committee submitted its report on 30 April 1984. The Committee was fully satisfied that the College was ready, in terms of both availability of land, and physical and academic infrastructure, to start degree courses.

Only a year later, in 1987, Egerton University was established as an independent institution through an Act of Parliament, becoming Kenya’s fourth public university (alongside University of Nairobi, Moi University, and Kenyatta University).

A vibrant and focused Vice-Chancellor, at the end of the 1980s and the start of the 1990s, Prof. Musangi laid a solid foundation for the growth of Egerton as a University, paying equal attention to academics, research, and community service. This was a difficult period for university education in Kenya, when a worsening economic situation in the country and the consequent decline in financial resources allocated by the Government to public universities, coupled with two double intakes of students (in the 1987/1988 and the 1990/1991 academic year), made the functioning of the newly established University challenging. Prof. Musangi faced the difficulties and ensured growth and stability through an admirable balancing capability. With students, he was a strict disciplinarian, and at the same time he was their best advisor, an inspirer, and an undisputable role model. Sociable and approachable, he gave the impression of working with effortless ease, yet accomplishing all that he set out to do.

Prof. Musangi published widely in the area of Animal Science and Agricultural Education. On leaving Egerton University, he worked as a Consultant to several international organisations and development institutions. In 2013, President Mwai Kibaki appointed him as the Chancellor of Kabianga University. In his retirement, he spent most of his time within Nakuru County, meeting and socialising with his former students, peers and friends, as well as enjoying the game of golf. Friends enjoyed his generosity and infectious laughter.