Since 2020, Makueni farmers through ICRISAT adopted the Egerton Mbaazi 1, 2 and 3 improved seed variety to ramp up pigeon farming in the region and address food and nutrition security in the region county.

"So far we have contracted 41 farmers whom each has between 0 to 10 acres of land to grow the pigeon pea varieties developed by Egerton University, and after the harvest, we buy back the seeds at Ksh 100 per kilogram," said Mr Towett. 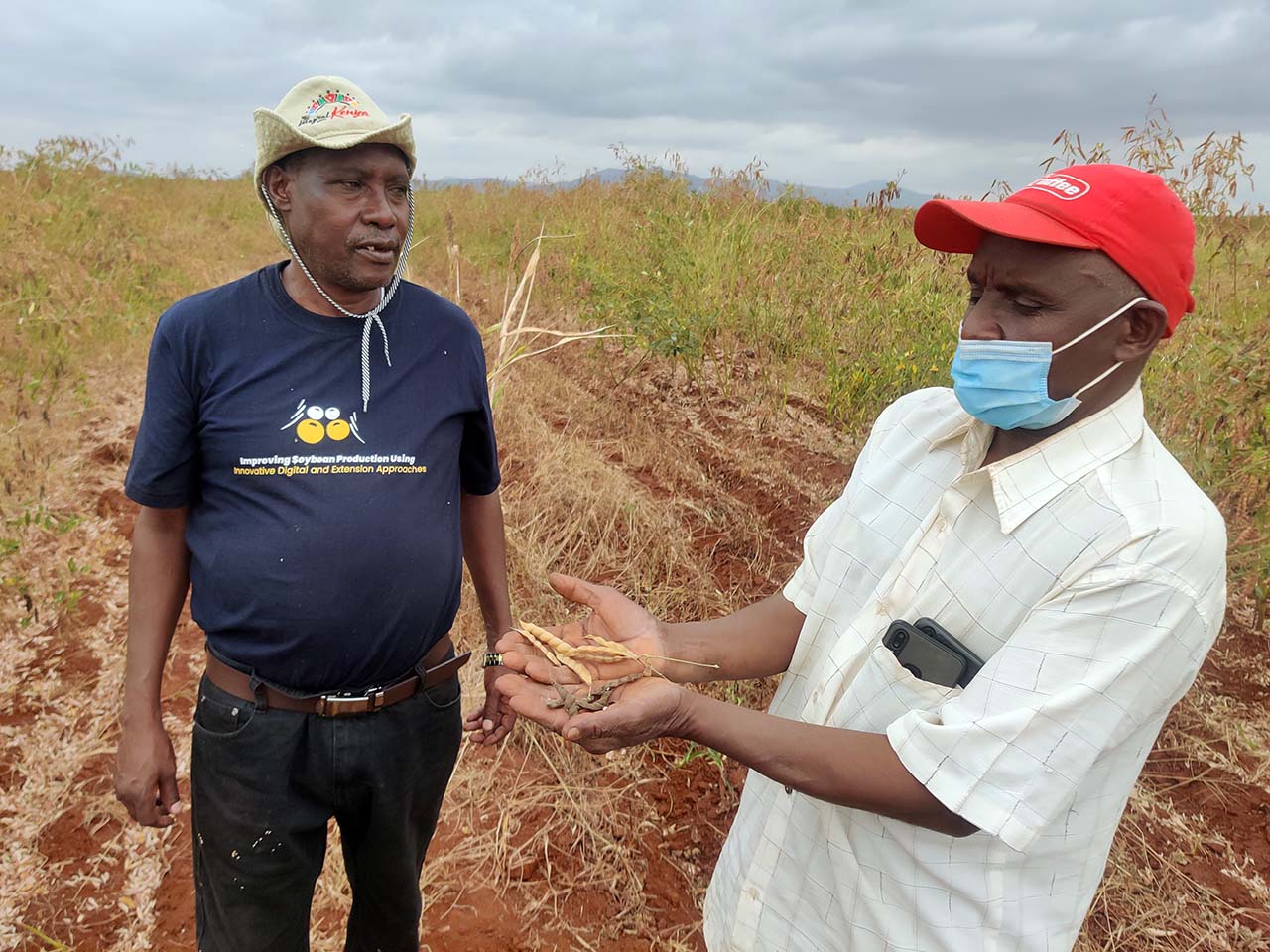 Mr Bernad Towett, a senior agronomist and seed system specialist (on the right), is with Mr John Musyoki (on the left), a farmer contracted by Egerton University to grow the improved pigeon pea seed variety (Egerton Mbaazi 3). Mr Towett noted that the enhanced seed variety produced a higher yield when compared to the traditional local pigeon peas.

"The University released three varieties Egerton Mbaazi 1, 2 and 3 in 2020 after a lengthy research process. Under the seed multiplication programme, ICRISAT distributes seeds to the farmers while Egerton University purchases the seeds," he added.

The seed specialist added that the new high yielding seed varieties matured earlier at four months and are more resistant to pests and diseases when compared to the local variety that takes up to 10 months.

"What makes the Egerton seed variety is that the researchers developed to be an early maturing variety, and this enables at least three harvests per season as compared to the traditional variety that experiences terminal drought due to late maturing," said Mr Towett.

One of the beneficiaries of the improved seed variety is Mr Peter Kisuli, a farmer based in Emali town and also serves as Chairman of Makueni Agribusiness Ventures, whose members are among those doing contractual seed production

He first learned of the improved seed variety through training organized by ICRISAT and the Makueni Agribusiness Ventures group he acquired 4 kilograms of the Egerton Mbaazi 1 seed, which he planted at his one-acre farm.

According to Mr Kisuli, the Egerton Mbaazi 1 took four months to mature despite the relatively dry conditions instead of the eight months it takes for the other varieties.

"I planted this seed variety last October, and by April this year, I had already harvested. Some of my neighbouring farmers who planted the traditional variety did not have a bumper harvest. Many people have come to now prefer this seed variety," said Mr Kisuli.

Despite improved harvest, farmers who have adopted the enhanced seed variety in the county face myriad challenges, including pests, incidences of theft, and damage from unsupervised livestock.

One of the pests that attack the pigeon peas while in development are the pod sucking bugs.  They mainly feed on the pods and the seeds.

"There was this one time I caught someone who had stolen around 100 kilograms of the crop. I reported him to the authorities. On the other hand, some people release their cows to roam and eat up the crop while still developing. These are some of the losses that we as farmers are facing," said Mr Kisuli.

"Now that the crop is ready, I have to work harder and ensure that I have harvested before I incur any further losses. Currently, I am expecting to harvest 500 kilograms," he added.

The Makueni based farmer called upon the people of Makueni county to embrace the Egerton Mbaazi seed variety as it has proved it can do well in semi-arid conditions and matures in four months as opposed to the traditional variety that takes up to eight months to mature.

Mr Kisuli called upon the County Government of Makueni to step up their extension services and educate farmers on the improved seed varieties that researchers in Kenya develop.

"Researchers from institutions in Kenya such as Egerton University better understand the farmers' needs and the conditions in which we grow our crops. I call upon the county government to seek more collaborations to improve on their livelihoods," said Mr Kisuli.

Mr John Musyoki, another farmer who adopted the improved pigeon pea variety (Egerton Mbaazi 3) and also part of the Makueni Agribusiness Ventures, noted that it had done well in the drought-prone area.

"We have had three harvests since we planted in the last season late last year. However, the local traditional variety is yet to flower. Other farmers have also noted this with keen interest of adopting the Egerton seed variety," said Mr Musyoki.

"In the first and second phase of the harvest, we only pruned the pods, and now we are in our last phase of harvest, and I can confidently say that the crop flowered very well and has given us good yield," he added.

The major challenge Mr Musyoki faced when he planted the pigeon peas in the eight-acre farm was weevil infestation, and with the help of agricultural extension officers, they are looking for ways to manage the infestation.

Mr Towett said that the University would contract more farmers from various counties such as Elgeyo Marakwet, Turkana, Kitui, Machakos and Tharaka Nithi after a successful run in Makueni County.

"In addition to the pigeon peas, we plan to introduce improved variety sorghum and green grams as we enter into contractual agreements with farmers in other regions," he added.