A good number of years ago, in 1973, I received agood number of years ago, in 1973, I received abursary from the Aga Khan Department ofEducation (Tanzania) to study Dairy Technologyat Egerton College, as it was then known. I recall trackingfrom Moshi to Nakuru with Naushad Jan Mohamed, who hadalso received a bursary to studyAgricultural Engineering and would thusbe my college mate. Upon reachingNakuru we looked for Mr. Alibhai Gilani.We had a confidence-building letter ofintroduction to him from his contact inMoshi. Mr. Gilani arranged to have hisson take us to the college. I rememberbeing dropped off just outside theKennedy Hall, which would become ourmeal centre for the next three years.Everybody called it the Mess. We donneda gown every time we went to it fordinner. The greenery of Njoro with itscrisp evening chill and fresh air wasinstantly welcoming.
I had heard numerous stories ofEgerton College: of how it had begun asan agricultural school for children ofcolonial farmers; how, in 1961, thecollege had opened its doors to studentsof colour; and how elitist it had been inthe colonial-era treatment of its students.Every evening the students left theirshoes outside their room to have thempolished for next morning and droppedtheir dirty clothes in a bag to have themwashed and ironed. None of theseprivileges existed in 1973. However, thepristine environment and pride in upkeepwere evident. 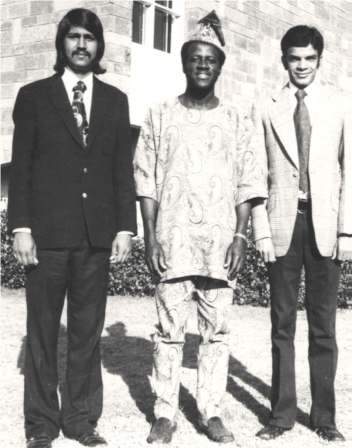 Mr. Shiraz Shariff (left), Vice-President of the Egerton Students Union, together with the Union’s President, Mr. U.A. Salau (centre), and Treasurer Moez Fazal, during the 1974–1975 academic year (Both photos in the story courtesy of Mr. Shariff) I was assigned a cornerroom at Old Hall and marvelled at theflowers and green shrubs growing outsidemy window. The magical atmosphere inspired me to write a few poems.inspired me to write a few poems.
By 1973 the College had built a reputation for itselfthroughout Africa, and there were students from all over thecontinent in its various programmes. I came across andinteracted with students from Nigeria, Botswana, andTanzania, all of whom were in the Dairy Technology programme with me. The Guildford Institute of Dairyprogramme with me. The Guildford Institute of DairyTechnology was established with funds from overseasdonors. We even had professors from Denmark (Mr. Hanson)and India (Mr. Bhanumurti) on the faculty along withKenyans such as Dr. Peter Shalo, who was the Chairman ofthe Department of Dairy Technology.
By 1974 I had become quite involved with studentadvocacy and successfully ran for the position of Vice-President of the Egerton Students Union (ESU). Mr. U. A.Salau of Nigeria was elected as President, and Mr. MoezFazal of Tanzania was elected as Treasurer. We put in a lot ofeffort to develop the Junior Common Room (JCR), arecreational centre for students and a party place with alounge for entertainment. ESU made profits from the JCR canteen, and the money was used for celebrating year-endcanteen, and the money was used for celebrating year-endevents and Christmas parties. It was at such functions that thestudents were able to socialise and make friends.
Upon graduation in 1976 with a Diploma in DairyTechnology, I made applications to the agricultural faculties ofthe University of Strathclyde in Scotland, the University ofIowa in the USA, and the University of Guelph in Canada. Itfelt great to be admitted to all three universities. This successwas a confirmation of the recognition Egerton College hadachieved on the international academic stage. I accepted theUniversity of Guelph because of the scholarship I was offered.However, I ended up doing my undergraduate and graduatestudies in Social Work at the University of Calgary.
Calgary is a city at the foothills of the Rocky Mountains inAlberta, Canada, which is home to my family. In 1995 I ran in aby-election for public office as Member of the LegislativeAssembly (MLA) for the Government of Alberta and served forfour successful terms from 1995 to 2008. At the beginning ofeach term the MLAs elected from among themselves threePresiding Officers – the Speaker, the Deputy Speaker, and theDeputy Chair of Committees. For two of my terms I was alsoelected by my peers as Deputy Chair of Committees. It did nottake me long to realise that the skills I had built as Vice-President of ESU had prepared me well for the leadership role Iassumed in Alberta.
During my days as an MLA I worked on projects of GoodGovernance in various parts of the world, and especially inSouth Africa, which had just dismantled the apartheidestablishment. Alberta had twinned with the Province ofMpumalanga, formerly Central Transvaal of South Africa, andI worked on building capacity in the senior bureaucracy of thatprovince. We had identified ten departments to which weprovided mentors and training at the University of Alberta.President Thabo Mbeki acknowledged to me the positiveimpact our mentorship programme was having on the newcadre in the Mpumalanga government.
When in August of 2019, after 46 years for me and 58 yearsfor the first interracial class, some of us alumni had a reunion atNjoro, I was deeply moved to re-live the memories of myyouth, all of which were invigorating and a source of pride. TheUniversity was a most generous host. We are grateful to it as wealso pay tribute to the memory of Dr. William Odongo Omamo,the first African Principal of the College which has given to theworld thousands of agricultural practitioners.
Alumni , Egerton University